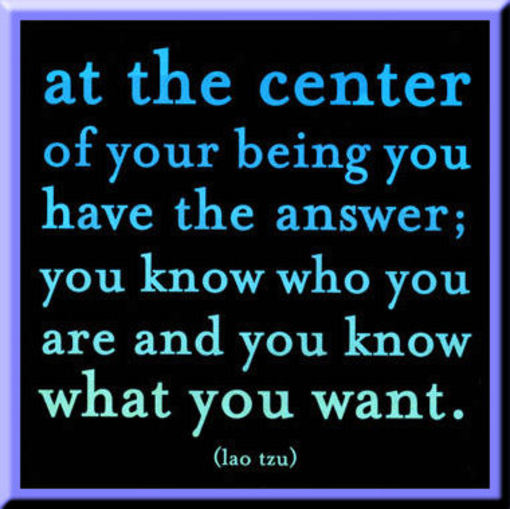 Comments for: At the center
Placelowerplace Report This Comment
Date: September 30, 2008 05:37AM

i want you stop philosophizing and get on with something productive
Mrkim Report This Comment
Date: September 30, 2008 01:54PM

True, true ... everything is for self, including love. If that evades you, best think a bit harder

nowadays its hard to figure out what you want cuz MTV and HOLLYWOOD wants you to want what THEY want.
but having some bling and fuck nice bitches is a good option for me too.
after that i may find out what i really want :-)

If knowing exactly what you want (out of life) seems clouded by external forces it would seem to point to a lack of personal understanding. If you're focused in your thoughts, external ideas may be explored and pondered for their validity but any impact on your personal ideologies relative to such things shows a lack of commitment to your own thoughts unless such inspections yield revelations in their validity, and in turn amend your personal thinking on something from this new awareness.

All in all, this is the sign of one either in a state of personal transition or unsure of the validity of their own beliefs, or .... one as most of us are, still weaving their way through this wilderness we call life and finding new paths at every turn, which is all good.

Life is all about progression, and if you doubt that, a close look at your own thoughts and ideologies from just 10yrs ago relative to how you feel today will likely make one rethink the logic of that statement.

However, letting others steer the boat through clever marketing and psychological manipulation points to weakness

Mr.Kim, just say "Moo". "I watch MTV...." shows there is no criteria for intellect and your words (as profound and to the point as they are) turn into "whomp whomp whomp blah blah" with those sorts of organic waste. However, I really liked reading what you had to say and in addition to that believe you have a future in philosophy at a university level.

Thanks PLP but I can't envision a shingle that would read : Mechanic, Poet, Philosopher

In an effort to preserve my sanity and the few remaining brain cells I still posess I do my best to stay away from the magic eye. In fact mine sits completely idle unless I'm watchin a DVD

Yeah I can see that, the last guy that had those qualifications, was murdered, plagerized, and his words distorted for profit by the same followers that called him 'the son of god'