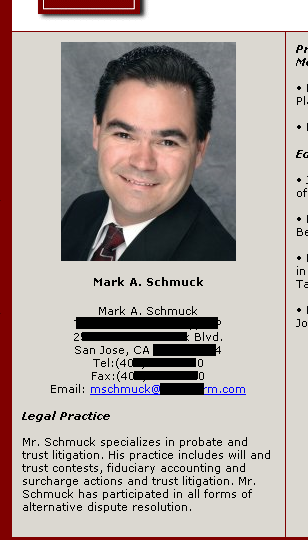 Comments for: What A Schmuck
Anonymous Report This Comment
Date: February 11, 2005 09:15PM

assuming this is real, an unfortunate surname... might be a good case for considering changing your name... like a woman I used to know whose last name was Hardcock (seriously)... you can imagine the abuse she suffered... she eventually changed it to Harding...
Anonymous Report This Comment
Date: February 11, 2005 11:08PM

In the 1960's there was a bet going on at a hospital in california when the black people were trying to give african names to their children the interns at the hospital would make up names at random and try to get the black mothers to choose the name with bet's on who could make up the most laughable name.the winner was according to black radio talk show host ken hamblin SHI-TI-DID or when placed together spells shit I did.go figure.
Anonymous Report This Comment
Date: February 12, 2005 12:39AM

That is in fact his real name. He is a lawyer in the San Francisco Bay Area. Along the lines of what 22569 said, I know a girl named Shithead (pronounced Shi-tay-ed). Her family is from India. Poor girl has had it rough...
Stiffler Report This Comment
Date: February 12, 2005 01:08AM

i no a gut named chris bates...wen he was late for the plane they called out on the intercom. "could MASTER. BATES come to the reception" and ben dover lives in dublin