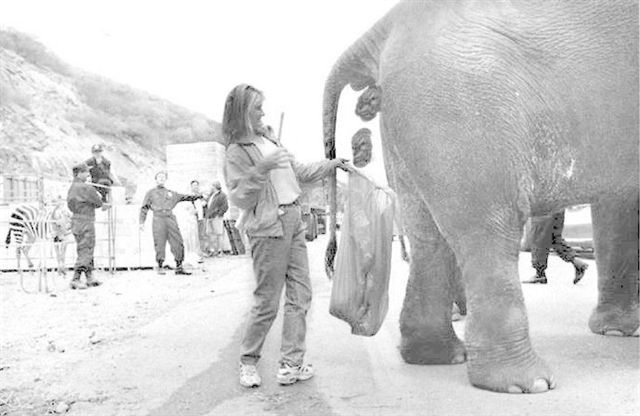 Cleaning up elephant shit is essentially what his job would have been...4 debt-filled years of it
yamon Report This Comment
Date: March 15, 2005 09:12PM

You mean the economy that Bush inherited from Clinton?
Anonymous Report This Comment
Date: March 15, 2005 09:56PM

Let me start by saying that I am not that big of a fan of either Clinton or the Democrats & I have zero faith in the Republican party. I am an Independent.

However, Clinton and the Republican Congress worked together and balanced the budget.

Bush and his congress have run up record deficits and have granted tax breaks to the wealthiest 2% of Americans while the rest of us get stuck with essentially more of the same....jack.

Bush has done all of this at the same time cutting funding on a number of agencies including those affecting Veterans. Bush has also told lie after lie after lie about the funding for Iraq, Social Security "reform", Medicare perscription drug "benefit", No Child Left Behind, etc.

Folks, by the end of Bush's 8 years he and his congress will have tacked on over 5 trillion dollars in new debt with no end in sight. Guess who will get stuck with that tab? Not the spoiled, dimwit baby-boomers who have run up the National Debt.....It will be you and your kids.

The U.S did not reach 1 trillion dollars in debt until 1981, by the end of the Bush administration's 8 year run of irresponsibility the debt total will be nearly 10 trillion.

205 years to reach 1 trillion, 25 years or so to reach 10. Stupid and irresponsible are the only words to describe the situation.

Look, I am not a Democrat or Republican. But other than lying about a blow job, Clinton (who I am hardly a fan of)did a pretty good job. With the economy especially.

So coming from an independent voice, I gotta say, give it a rest with the Clinton bashing. He left your boy a pretty damn good economy.

Bush's answer is to put it all on the credit card and let someone else (your kids) pay for it later.

I thought that was john kerry after his sex change...head pooper scooper at the zoo
Anonymous Report This Comment
Date: March 16, 2005 04:06AM

Damn tootin', trans am. Sure, Clinton had the morals of a back alley cat. Sure, he lied and made some dumb mistakes. But he didn't tank the economy. He didn't have to slash budgets over and over to balance short-sighted tax cuts that favored the wealthiest in the country while screwing the rich. Face facts, kids. You can lie to each other about how good a job bush is doing all you want, but the truth is, you and your kids are going to get hit with the bill. All of us are going to have to clean up the mess that bush has created in the last five years.
Anonymous Report This Comment
Date: March 16, 2005 04:06AM

Hey Trans Am thats a bigger bag of shit than that lady is carrying.
Black_Trans_Am Report This Comment
Date: March 16, 2005 10:51PM

Facts are facts,you can't dispute how fucked our finances are and will be for our life and our kids and grandkids even.Same old thing...Rich keep getting richer and the poor stay poor.Thank you for the Bush legact you damn Republicans.Go blow old W....no big bunch of females are standing in line to do it that for sure.
Anonymous Report This Comment
Date: April 09, 2005 12:06AM

One of the speakers at th NYC Republican Convention spewing out fertilizer!!!
shaDEz Report This Comment
Date: April 17, 2005 03:02AM