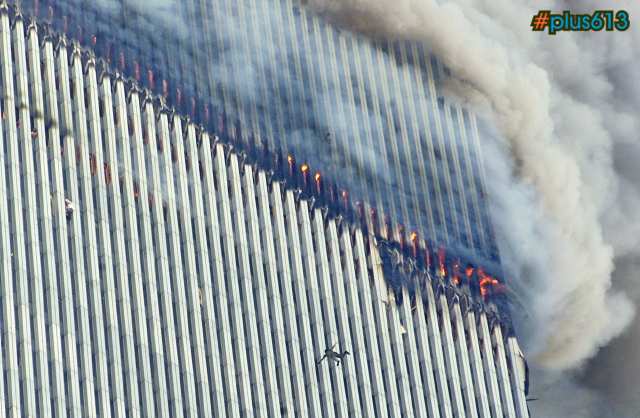 I heard these were around, but peace to the soul who made the brave decision. I can only hope that the sad bastards who post pics like this get bored and move on.
Zeh Report This Comment
Date: March 13, 2004 07:50PM

Maybe now we'll learn how to make buildings that can be evacuated in under the 18 minutes that it took this one to collapse.
Caspertoo Report This Comment
Date: May 23, 2004 06:05AM

Hey dumbass shooter, no large building in the world over 50 stories can be evacuated in under 18 minutes. It is simple math, it takes more time to walk down 50 stories than 18 minutes.Plus the 737's that crashed into the twin towers were larger than the average plane when the towers were built, they were actually DESIGNED to be able to have a 707 crash into them and remain structurally sound. But bottom line is fuck you poster for thinking that shot is funny.
roguetrooper Report This Comment
Date: May 25, 2004 11:50PM

sick very sick, although i believe he has got the response that he wanted. sad man
Hard in Harlem Report This Comment
Date: June 21, 2004 06:39AM

This was someones family member people !
Bruce Report This Comment
Date: September 04, 2004 04:26AM

I have to agree with hard in harlem. This person was actually caught on video from a different angle and was identified as a young woman........someones daughter. Freedom of speech is one thing, but this is not needed.
SUPERMAN SAID... Report This Comment
Date: September 23, 2004 05:22PM

it seems something in ur brain got damaged during landing...
no name Report This Comment
Date: October 15, 2004 04:25AM

I wish the media would grow/show some respect...
fucking americans Report This Comment
Date: October 24, 2004 06:01PM

if one person had died in a funny way, would you laugh? more people die in car crashes A DAY than died in that one accident. the media coverage is the only reason you care. if you saw every car crash you'd have perspective
fucking foreigners Report This Comment
Date: October 30, 2004 07:29AM

People die in car accidents because at least one person was driving like an idiot - someone is always at fault. All those who died on 9/11 were innocent.

Hey look to the upper left of superman u can see spiderman. Its a justice league reunion or what?
anonim Report This Comment
Date: December 27, 2004 09:59AM

Serves you right you fuckin americans you should get hit by more plains.
apbio Report This Comment
Date: February 11, 2005 06:22AM

hey! did you see politicians dying that day? did you see the shareholders of haliburton being killed? did you see anyone that was responsible for harming other countries die that day? FUCK NO! the regular american public doesn't deserve this! the people that died that day were innocent people just working at their jobs. and it wasn't just americans dying that day! people from 81 countries died on 9-11. just because we americans can be fat, stupid, and ignorant sometimes does not mean we should all die. keep your mind open.
Anonymous Report This Comment
Date: March 01, 2005 01:51AM

5237. you faceless motherless pig fuck sick bastard poor excuse for an idiotic animal. someone is going to find you, and kill you. you sick fuck. if it was your family, you would want some dead too. you would want justice and revenge. if you think "americans" deserve to get hit by "plains" you stupid mispelling fuck, remember the facts mentioned by 10540, you even killed some of your OWN PEOPLE. sick piece of shit! if you were here right i'd fucking crush your skull! i hope these terrorists realize how much hatred they've created. when it rains down on them it's going to be the biggest shit storm of all time! they will be flushed!
Anonymous Report This Comment
Date: March 07, 2005 07:58PM

hey 5237 where do you live? because i've got something for you.you definately wont like it ,but i really want to give it to you personally!let your imagination wander buddy. i,m in dallas if you would like to pick it up!
Anonymous Report This Comment
Date: May 17, 2005 07:47PM

Okay okay you can steal my idea.How about a NYC fire dept hawker harrier that has a suction hose and giant water tank with super fast impellers to load the tank quickly and a high pressure water cannon jutting out like the mid-air re-fueling nozzle.Maybe I'm a dreamer,but i think its feasible maybe just not economically sound.
Anonymous Report This Comment
Date: July 15, 2005 11:18PM

This picture just isn't funny at all. 5237 is a useless cabbage that needs to be bitched slapped about the head. You really are a rotten bastard you fucking puke!
fossil_digger Report This Comment
Date: October 08, 2005 02:17AM

This is why we need to rid the world of asshole terrorists. NEVER FORGET.
Marmalade Report This Comment
Date: July 13, 2009 10:56PM

I'm not the biggest fan of America, but for fuck sake, that person is an innocent victem. You're mocking the dead, and the dead cannot defend themselves.