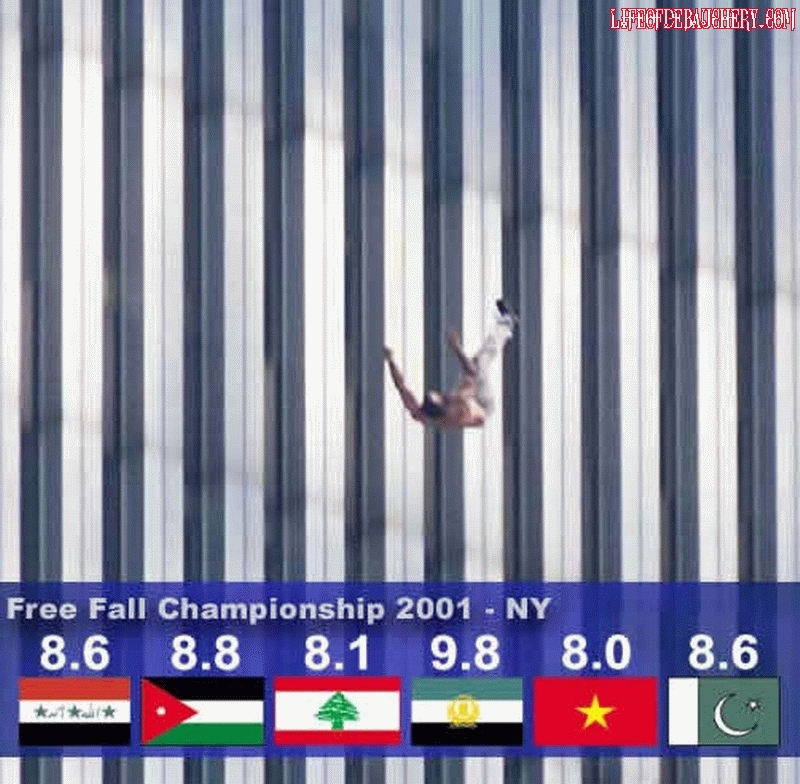 you sick asshole im canadian and i know better then to make fun of that ..... fuckin dumb asss what would you have done dickwad and 80 stories up and now where to go and not wanting to burn alive ........ one more question did your parents have any kids that lived?
BigDawg Report This Comment
Date: July 15, 2005 06:18AM

you sick bastard how the hell could you do that im a canadian and i know better then to make fun of that fuck man i gatta question for you .... did your parents have any kids that lived?
spartan69696969 Report This Comment
Date: July 15, 2005 06:21AM

Poor dood probably had plans to go out that night........you just don't know what can happen in a day......it's so important to do what you can while you've got time, cause no one on this planet knows when your time is up.
scottc Report This Comment
Date: July 15, 2005 04:49PM

How many can name all six countries whose flags are shown in the image?
Anonymous Report This Comment
Date: July 15, 2005 05:45PM

i bet those fucking ragheads in gauntanamo would find it funny if we started tossing them off the empire state building now wouldn't they?
duane Report This Comment
Date: July 15, 2005 10:33PM

Im ready when you guys are.If they need voulunteers Ill do it.I would not even feel bad throwing them off.
Anonymous Report This Comment
Date: July 15, 2005 11:24PM

for fuck's sake. how hard a decision must that have been to make. stay and die by burning or toss myself off the building and die from the impact (or with luck, a heart attack on the way down). fuck. don't ever want to be faced with making that choice. that's fucked up. poor fuckers. none of the cheesy ass fuckers that post pics like this would have the balls to make a decision like that. they'd probably piss themselves while sobbing in a corner and asking why no one is rescuing their sorry ass.
shaDEz Report This Comment
Date: July 15, 2005 11:30PM

thats great . very funny ,makes me proud to be an american.we do what we want. thats the american way. fukk you and who ever dont like it.eat shit.
Anonymous Report This Comment
Date: July 16, 2005 05:57AM

Stiffler, fluff, madamX ,Im proud to be an american and like most of us we wouldn`t piss on you if you were on fire
duane Report This Comment
Date: July 17, 2005 02:01AM

Actually, I would use their decreped ashes in my dough when i'm making bread. then when i shit it out i would wipe my ass and smear it all over "gruff"'s mothers grave.
Anonymous Report This Comment
Date: July 17, 2005 06:28AM

fuck those bastards.....thats what they get for working in a terrorist target.
Anonymous Report This Comment
Date: July 17, 2005 06:48AM

I guess those idiots haven`t heard of "The Patriot Act" let me clue them in, our country`s law enforcement now has the power and pays people to vigorously investgate any one who may be vaygly sympathic to the terrorist who did this cowardly act. Your little post fluff,meets this criterion.And anon19212,your comment will raise their curiosity and your are not anonymous.Seems like you geniuses are pretty pro terrorist,but im sure they will find out.You will find like real Americans,they don`t have much of a since of humor when it comes to the W.T.C
irish_guy Report This Comment
Date: July 17, 2005 10:05AM

u gotta ask yourself what caused this guy to jump in the first place.poor man may have never raised a hand to any one in his life but because of american forigen policey or monetairy policey should i say people are willing to blow them selves up and kill people.look at london last week,all because of an oil war the usa started yet the american public will still vent there anger on a guy posting a picture.this pic should never have been posted.this pic should never have happened in the first place
Anonymous Report This Comment
Date: July 18, 2005 03:54AM

Well said [email protected], you got to the centre of the argument don’t through a punch unless you are prepared to take one this happened because America invaded Iraq due to greed of oil, & even with oil deposits depleting America as a whole is still the largest consumer of fossil fuels, by running big Chevy blocks ect Don’t get me wrong I love those cars, & I praise them for building them however there is a more serious matter to hand if you are running out of a certain thing you don’t just up & declare war on another country & if you do, then be prepared to feel a reproduction, & when that happens don’t bitch & whine about it as the innocent people that are now paying with there lives have already died in Iraq. Its not morally right but then neither was the invading country, & that’s also why we back in UK were bombed we got involved with something we should not have gotten involved in & lost family members who had nothing to do with it & all because one country was to greedy & some PM got us involved cus he has no balls to take a stance & say no this is not right the UN has found no weapons of mass destruction therefore they are not a threat we need to find the individuals within that country, but I guess this is a higher train of thought that the PM is not capable of.
Anonymous Report This Comment
Date: July 18, 2005 03:15PM

Solution: Whenever there's some conflict brewing amongst countries, just make it a rule that all the involved leaders meet on an open field carrying big swords. They are the only ones to fight. Whoever wins the fight, rules. It'll never happen cuz politicians live in a world of thier own and don't have the balls to back up their words, especially not that dumb coward Bush. He sends young men and women, mostly from poorer families, to die for his words. He's the sick fucking bastard, who talks about freedom to the world while his secret police "Patriot Act Thugs" kick in doors and locks up Americans without charge or allowing them to see a lawyer on mere suspicion. Kinda like the Soviet KGB did whenever someone would speak too loudly against the government. Yeah freedom, ain't it great?
Anonymous Report This Comment
Date: July 19, 2005 02:55AM

irish guy and costa patra you guys are confused and confusing.Bush from day one personally wanted Sadam out of power a long story but it had to do with bush senior.wtc attack gave bush the excuse he needed and against his own advisors declared war.The UK has to back America we have always backed the UK Its too bad the reason wasn`t oil at least that would make some sense.When a soldier is killed in war it is expected. When civilians die due to a attack on soldiers its a tragedy. But purposely targeting civilians is a atrocity.But the poor soul in the picture above arms and face burned, he had to escape from the heat he had no choice.Anyone who cannot feel compassion for a fellow human being in that mans situation is part of the worlds problem today.The least anyone can do is to show a little respect and keep your igornant mouth shut
Anonymous Report This Comment
Date: July 21, 2005 11:07PM

Do you think any of those poor people were thinking about foreign policies? It was horrible what they went through. And yes, it's horrible about all the people who have suffered and died as a result of power mongering. This attempt at humour simply sucks - period!
gruff Report This Comment
Date: July 22, 2005 07:02AM