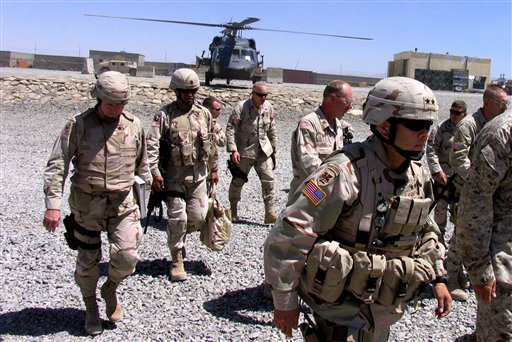 
I guess killing them is freeing them of human problems.
anonymous Report This Comment
Date: August 23, 2005 08:03PM

hoa shoot the fuckers let em all burn in what ever hell thay want but thats wehre ther going
aDCBeast Report This Comment
Date: August 24, 2005 12:37AM

US Soldiers burn in hell ? Man you're tougher than me.

Onward Christian soldiers marching on to war with the cross of Jesus kicking down the door...
Mint Report This Comment
Date: August 24, 2005 08:03AM

erm..you do realize its not the people that are shooting at us we are trying to free...right?
Anonymous Report This Comment
Date: August 24, 2005 11:01AM

you've hit the nail on the head. The military is not supposed to pick out who is a "friendly" and who is the "enemey". The military should only operate with one idea in mind. kill everything that moves.

This is why the ground occupation in Iraq is failing. The military is being set up to fail by Rumsfeld and Bush. People who know nothing about combat.

[email protected]:
It's about our safety aswell.

[email protected]:
Clearly a chickenshit like you wouldn't understand the brotherhood.

[email protected]:
Any excuse not to go,huh?Faggot.

[email protected]:
Again,you're a fuckin idiot and clearly can't filter biased media.Stop listening to Al J. and CNN and get your facts right.The ground occupation is not failing.You only hear about "failures" because if the media were to report success they would be brandished as biased by faggots like you.What about Fallujah?Insurgents got raped there didn't they.Your a fuckin idiot,mate.

[email protected]:
Your a cunt but this is funny.

No media bias. I get the straight dope.

Don't be flattered that the Shia and Kurds are thanking the hell out of us. The US aided Saddam Hussein in oppressing them for the past 25 years.

The Shia will FUCK us in the end because they already act in accordance to IRANIAN muslim leaders. Giving the Shia freedom meant the southern part of Iraq and 80% of Iraqs oil supply will go to Iran.

[email protected]:
I'm not thankul for anyone thanking us.They can all go fuck themselves.I'm in this for the West.

I'm actually hoping they fuck us.That just means more chance of pussies like you supporting us when we inevitably crush them and the rest of the backward nations.

Try to think past the first logical step, son.Or maybe you should just let the big boys play.

And show me this "dope" you speak of.AJ maybe?


They can't fuck us now. That would cause the Iranians to start WW III. Plus every muslim nation including Saudi Arabia would join them in plowing the US asunder.

Calling me a pussy because I denounce lame brained ideology is so passe.

Beast you dont have a clue what our military is capable of do you?Logistics is why we have not taken N.Korea yet.We would have to convince a country to allow us to base there for the invation,in Iraq we were allready based nearby for the invasion.One problem at a time.Multitasking is fine on your computor but not for taking out countries.
i_hate_you_cunts Report This Comment
Date: August 29, 2005 12:05AM

[email protected]
What a suprise!In the space of two arguements you do a complete about face.So now they can't fuck us?You just said they would?Its obvious you're a sad little man with nothing better to do than bait people in the safe anonimity of the net.

You "denounce"?I bet you're another sys. admin. who thinks because he knows 500 Linux commands he's far smarter than the rest of us.You're a waste of space and not worth my time.gruff was right about you.