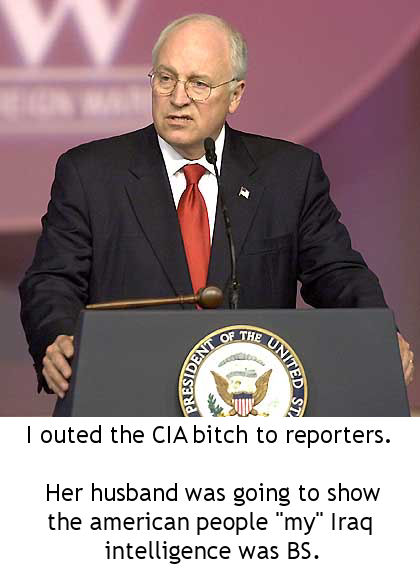 No, "was" is correct in both instances. The quotation marks should definately be around "intelligence" though. American should be caps as well.
Anonymous Report This Comment
Date: October 28, 2005 01:03PM

I like that turned up lip thing, makes him look evil. Took a while to get this the right stop action shot, but it's very effective. He has helped make life hell for some terrorists.
Anonymous Report This Comment
Date: October 28, 2005 03:11PM

And helped make life hell for many now-disabled Americans too . . . plus of course the Americans who aren't disabled but rather just dead, but they aren't complaining as loudly.
ToucanSam Report This Comment
Date: October 28, 2005 04:55PM

thank GOD for the right wing and the many Americans who believe in freedom, Liberty and the right to kill any son-of-bitch that treads us.
Anonymous Report This Comment
Date: October 29, 2005 08:27PM

Which "God" would that be? Allah? Zeus? Ra? Great Spirit? Huitzilopochtli? Vishnu? HaShem? Mars? Buku? Bumba? Tongnaab? So many choices. None of them real. And how exactly did Iraq "tread on us"? Are you thinking of the mythical WMD's? Now go turn Fox News on and your mind off.
ToucanSam Report This Comment
Date: October 30, 2005 06:22AM

I love Cheney's sneer.. it makes him look so... innocent.

(PS. Only the Rightwing is blessed by GOD, and only in America. The rest of the world is apparently totally fucked, coz only the USA is, like, blessed. It's true.)

toucan, right according who? Whats right to you may not be right to others, but I guess that was proven in the last two elections. loser
Anonymous Report This Comment
Date: October 30, 2005 03:07PM

john, your PS is exactly correct and it will always continue to be that way. OH NO I agreed with John, something bad is going to happen, oh that's right, his comment was sarcasm, mine was not.
John_Stone Report This Comment
Date: October 31, 2005 05:32AM

So 238240, God doesn't love ALL His creations? Just some of them who identify with a certain group.. a political group no less. News to me. What sort of Christianity IS that?
John_Stone Report This Comment
Date: October 31, 2005 06:09AM

"Its second goal is to ensure a predominant role for US companies in the development, production and sale of the country's vast reservoirs of oil. Indeed, the few documents made public from the Cheney Energy Task Force revealed that concern over losing Iraq to European oil companies, combined with China's insatiable thirst for petroleum and fears that it would increasingly encroach on America's sphere of economic dominance, were important reasons for the war."

"but I guess that was proven in the last two elections. loser"

This is one of the things that really gets to me. Since when has politics and the elections become a sporting event? We root on our team as if cheering for a college football game. It is all about "our team" winning and not about what is best for this country. I have young children. The past 4 years are making me really sad regarding the type of country that we all (yes, all of Americans on this website included -- even you aDCBeast -- and me as well) are leaving them. A nation burdened with unremitting debt; a nation rapidly losing our ability to actually manufacture anything; a nation consumed with our own entertainment; a nation exporting jobs and essentially selling our assets to support our consumerism. This country is in trouble, and it pisses me off to read comments treating this all like a game. Real funny game when old grannies are going to be out in the street in 40 years because we can no longer afford Social Security. Screw the winning and losing, we need to get this country back on the right track. All of us.

Look into alternate currencies, Truth.. they may be our best bet for mitigating the disaster.
Truth_from_Georgia Report This Comment
Date: November 01, 2005 03:32PM

Alternate currencies are useless. If we go down we're taking the rest of the world with us. You do not crater 25-30% of the world's economy without serious impact. I am figuring on land and maybe gold, because Europe and Asia are both going to be F$%&ed if we have a significant debt crisis since they (a) hold a huge portion of our debt and (b) prosper by selling to us (who will no longer be able/willing to pay for those products). We have a problem and they are going down too.

Actually, rethinking, perhaps China survives. They have a large-enough internal economy of scale to pull through based purely on internal demand, and they are willing to repress any large-scale protest over economic displacements from the closing of export-oriented facilities.

Perhaps India as well because the vast majority of the country at this point would not be able to tell the difference.


Fitzgerald is going to bust this fucker. Bye Bye Cheney.