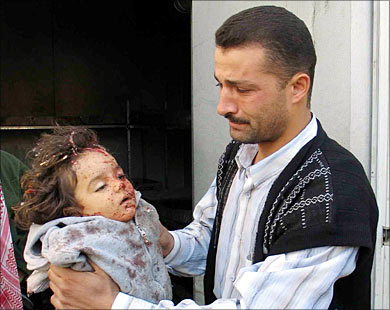 Comments for: american democracy in iraq(killed by us slodiers in a closed range)
destructor Report This Comment
Date: November 22, 2005 11:23PM

Now show us the ones saddam tortured in front of political prisoners.
rogue_1 Report This Comment
Date: November 22, 2005 11:31PM

YES Sadam murdered his subjects, BUT that does not excuse what the YANKS doing there
Anonymous Report This Comment
Date: November 22, 2005 11:54PM

lets consider how many of these pictures we would see if the American forces were not there to protect the Iraqi people from the fucks that would be trying to take over the country and commit crimes on humanity that could rival Hitler! fuck Saddam! he'd be considered a saint! wake up dumbass, war is hell and innocents are going to killed. the alternative is frightening!
Anonymous Report This Comment
Date: November 23, 2005 06:36AM

The kids in the USA would look just like that if the soldiers weren't over canceling their leaders ugly asses. It's a shame the little guys get in the middle and I feel bad for the losses. Take a look around and show me how many kids their kamakazee bombers wiped out. Wake up and smell the roses, Its not the Iraquis the military is after. Its the militants which are not Iraquis that are causing the problem. If there were a bunch of killers running around your town blowing up your friends, wouldn't you want someone to do something about it. If your local police didn't do something about it, you would call the Sheriff, if they couldn't do something about it you would call the State Police, and if they couldn't stop the bad guys, wouldn't you hope someone, anyone, would do SOMETHING? So your government is corrupt and is making money off your suffering, either from your labor skills or some other means and they are not interested in stopping the mayhem anytime in the near future. Now a capable country sends in some help to rid your community of those nerdowells that are rapeing pillaging and plundering your community. How do you repay them for risking their lives? Or do you? Or do you just sit there and complain because in order to get the bad guys, someone stepped on your lawn, God forbid. Or maybe your dog or cat got in the way and was run over by the badguys getaway vehicle. Do you throw the whole rescue team out because a few pets lost their lives. Meanwhile the badguys step up the harrassment to make a point about wanting to stay and wipe out a few citizens, yes and a few babies, now do you call it quits? Remember, the badguys are still out there blowing up stuff whenever they want. In every fight there is always a loss, and loosers. Is the fight being waged worth winning or is it not worth loosing? You have to decide what the end result will bring. People who wage war for the sake of religeon, seldom win. People who invade and occupy other countries just to gleen their natural resources, may win for a while but it is not easily held. Concider the Jews held by Egypt for 300 years, the Egyptians lost profoundly. They lost so badly, it changed the course of Egyptian history. Concider India and how England occupied it for so many years. All the scrapping and humiliation to the aboriginals. England left but it was not pretty. Japan set out to conquor the South seas and had her eye on capuring the USA, bad decision. The USA wasn't interested in colonizing Japan, just wanted to trade goods. The list goes on and on and on and on and on and on. We just happen to be the good guys in this case and the general citizenry is glad we are there. The bad guys are pissed because they can no longer exploit the citizenry. As the bad guys get exterminated, there WILL be colateral damage. If you don't want your kids hurt, keep them out of the streets. Grow up and get a life. You cannot have it both ways. If you want to surrender, get the hell out of the USA and go over and join the bad guys and see if they treat you any better than you have it here. And by the way, take all your other liberal friends with you. I'm sure Al Quaida, or however you spell it, will be needing all the help he can get.
avengerx Report This Comment
Date: November 23, 2005 01:56PM

fossil_digger : u talk abut saddam and the us entered iraq to save iraqi from him...am kinda confused u said it s to hunt terrorist ...isnt it?...make up ur mind ..or u ll be a conservative ie: having an excuse for every piece of shit u do
Anonymous Report This Comment
Date: November 23, 2005 11:12PM

avegerx, you are the most irritating acting like a muslim i have ever talked to! shut up asswipe and go home! i bet you get thrown out or strung up. terrorists are in iraq, and they will be hunted to extinction whether you like it or not. also no other extremeist piece of shit will be allowed to harrass, intimidate or live as long as we are involved. in whatever country they hide we will be there to kill them dead!
duane Report This Comment
Date: November 24, 2005 02:55AM

hehhe fossil digger....calm down boy ...hehh kitty kitty kitty ....calm down ...seems that texas had turned into an ox that cnt diffrentiat a shit ...listen man i ll say once and for all ..be it u be it any american uneducated scum like u ..cuz ur really irritating my ass man when u talk bullshit ...first man lisyen : U ARE FANATIC ...U ARE ADDICTED TO BELIVE THAT TERRORISTS ARE HINDING IN SOME JUNGLE WAITIN TO WHIPE UR ASS...man let s be honest u hve violence on the streets killing americans more than million of ur so claimd terrorists beside reply to this quest specifaically : BUSH SAID WE ARE INVADING IRAQ BEC HE HAVE WMD...HE DDNT SAY WE R HUNTING FOR TERRORISTS LIKE IN AFGHANISTAN ...SO HW THEY CAME UP ALL OF A SUDDEN ...??/WHAAAAA ...or if u consider killing a soldier who invaded ur country then it s an honor for evry human that terror thing ....FUCK U THIS SHIT IS CONTROLLING UR BRAIN WHILE UR GREAT PRESIDENT IS SPENDIN UR MONEY ON SOME BS..WHAAAAA OIL COMPANIE RE THE HAPPIEST NW STEALING MONEY ...WHILE US SOLDIERS RE DYING EVRYDAY ...A
and dnt call me a muslim again...ur not the one who say to me who am i or what belife i belong to...i ddnt call u a christian cuz it s my last thing i dcare for is ur religion ....luckily i hve a high self esteem nw ...but seem am quiting cuz am arguing w an uneducated fanatic ...man fuck u ....am in an americn uni livin a n american culture and 1st we learned is arguing USING LOGIC ...but seems ur one of ths ghetto s or gangsta s who s brains re in their arms and dicks ......fuck it ...sorry if i used bad lang dude but u got the hell out of me saying every time /: WE RE HAUNTING TERRORISTS HA HA AHA ...well there are terrorists in ur countries and all over the world ....BUSH IS CREATING A DELUSION 4 U CALLED : DELUSION OF TERROR AND SINCE NO POWER CAN FACE THE USA 2DAY HE HAD TO COME UP W SOMETHING TO USE UR TAXES AND SOULS 4 HIS BELIFES ,,,CNT BELIVE U STILL BELIVE IN THIS SHIT MAN ...C MON WE R IN THE 21ST CENTURY ......THINK THINK THINK AND DNT COME UP WITH A DIPLOMA JST TO IMPRESS ME HEHEH I DNT THINK AN EDUCATED MAN WILL SPEND HIS TIME ON SUCH A SITE ,,CMON I CNT PACE U ...HAVE TO STUDY ...SO LONG SUCKER .........AND AGAIN SORRY 4 BAD LANGUAGE HEHEHEHHEHE
Anonymous Report This Comment
Date: November 25, 2005 12:50PM

I thought fossil-dick's English was bad until I saw yours, avengerx, yet you're the one calling him uneducated! This is a sad reflection on the education system in America.
fossil_digger Report This Comment
Date: November 26, 2005 12:48AM

i don't even know how to respond to illiterate rambling like this, except, get in touch with adcbeast. he will need a sidekick on his new comedy show. 7244, i've never been much of a linguist. but i do have 3 degrees.
duane Report This Comment
Date: November 26, 2005 02:30AM

don't foget to vote on the politics forum folks
Anonymous Report This Comment
Date: December 21, 2005 09:33AM

No Gods in there...
Only negative heritages of Saddam and Bush...
What a tragic picture!