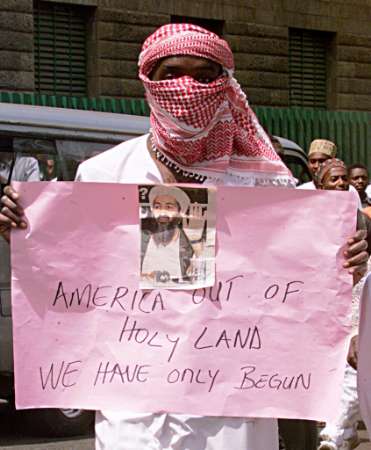 Is this before or after you idiots blow yourselves up!
Anonymous Report This Comment
Date: January 18, 2006 01:00PM

Every one of those ignorant sand niggers should be wiped off the face of the earth.
John_Stone Report This Comment
Date: January 18, 2006 07:19PM

That's this spirit! Suggest genocide! Innocence or guilt does not matter! Who started the fight does not matter! Let's just lump every brown person together and just attack the lot of them! Hey, that would make it simple and easy! We can always tell US from THEM! Wow!

(So, if Muslims all die, does Allah sort them out? Or does God take over that job?)

hey wait i am brown.
these dumb ass republicans want to spend a trillion a month so they can vote .Republicans are a walking idiots.They need Bush to protect them and sell them security. Americans use to roar for freedom,now they bleet like sheep for security. oh you republicans are so proud.
Duane Report This Comment
Date: January 18, 2006 11:11PM

From a republican,Madmex you suck ass shitbrick.You think you know everything,you simplify everything into two sentences for the world to see,makes me think the UN should come to you for some answers because they certainly need some help.
Kronk Report This Comment
Date: January 19, 2006 04:11AM

Hey, I like what John_Stone said! That is a great idea. No more worrying about collateral damage, just damage! The only good brown person is a dead one!
Oh, and since Allah doesn't exist, God would "sort" them out. Although, I think the sorting will go something like this: Lets see... ok, hell... hell... hell... wow, DEFINITELY hell... hell... you better believe YOU'RE going to hell... where's your what? Oh, your 40 virgins are right over THERE *THWAP scream..............sizzle* right next to the guy with the pitchfork. Holy crap! Look at that line! This is going to take a while... HEY, Saint Peter, could you take care of this? All you have to do is hit this "Hell" button a few hundred thousand more times. Thanks!
Anonymous Report This Comment
Date: January 19, 2006 07:29AM

The sign says we have only begun. Well, Homeboy, it looks like you are about finished. After a few dictators like Sadam get finished with you and your kind, you will decorate the desert in those mass graves like all those folks that oppose the present dictatorship, no matter who it is at the moment. Kinda like Rowanda. That was Talaban inspired and how many died? Of course the libs hero Bill Clinton didn't have the balls to finish the job so we have a bunch more malcontents to thin out. All you malcontent muslims out there that think you have a better way of life, why don't you show us how its done. So far, all you can do is run around and blow stuff up and live off money sent to you from outside your country. You couldn't make an honest living if you tried cause all you got in your head is hate. If it weren't for hating Americans, you would hate Europeans, and if there were no Europeans, you would hate each other. Grow up. Get over it. Find peace within yourselves and let your neighbors alone.
Anonymous Report This Comment
Date: January 19, 2006 12:42PM