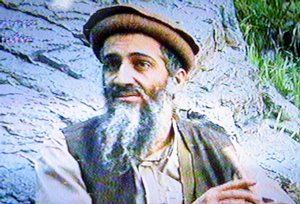 Died in mid to late December,2005. He is now interred in a carefully concealed grave in Iran.
But, ...
The War for Civilization continues.
Hassan Abbassi, “intelligence” advisor to the Iranian president, has been more specific: “We have a strategy drawn up for the destruction of Anglo-Saxon civilization,”
We must all understand that this is what we face:
a choice to fight to live, or allow our civilization to be destroyed.
Make a choice. Live or Die. That simple. Don't let the idiots like Cindy "the grave dancer" Sheehan, or george "the great obfuscator" Soros blind you to the stark reality.
One is stupid and manipulated. The other will be dead before the price for HIS manipulations comes due.

A SUPERPOWER CAN'T FIND HIM, LOL HE MUST BE THE GRAND MASTER OF HIDE AND SEEK.50 MILLION COMING READY OR NOT...LMAO
jgoins Report This Comment
Date: January 19, 2006 10:10PM

Sorry to disappoint. He is still alive, Aljazeera just received a tape from him which is verified and is only a month old.
John_Stone Report This Comment
Date: January 19, 2006 11:07PM

Well fossil_digger there are those who claim Bush is fabricating these tapes for his own benefit which is totally ridiculous. This tape came from Al Jazeera and I don't think bush has control over them to be able to fabricate the tape or the release of it. I don't know if OBL is dead or alive but in my opinion it doesn;t matter because the war on terror will have to continue until Al Qaeda is either destroyed or arrested completely. If the head is cut off the snake will grow another we must kill the body to destroy the snake.
fossil_digger Report This Comment
Date: January 20, 2006 02:41PM

true, it only strenghthens our resolve.

shows the intelligence of al-jazeera again.

WHATEVER ALL IT MEANS IS AL QAEDA IS HEADLINES ALL OVER THE WORLD..WHICH WILL GIVE HOPE!! SAD..
MousAnony Report This Comment
Date: January 20, 2006 08:00PM

he looks so innocent in that picture
but appearances can be misleading
aDCBeast Report This Comment
Date: January 20, 2006 11:30PM

It's the self fullfilling prophecy that the Bush administration knew would occur.

The Bush admin knew that if they killed some muslims that new terrorists would created thus insuring the neverending phony "war on terrorism".

My message to you is about the wars in Iraq and Afghanistan and how to end them. I did not intend to speak to you about this because this issue has already been decided. Only metal breaks metal, and our situation, thank God, is only getting better and better, while your situation is the opposite of that.

But I plan to speak about the repeated errors your President Bush has committed in comments on the results of your polls that show an overwhelming majority of you want the withdrawal of American troops from Iraq. But he has opposed this wish and said that withdrawing troops sends the wrong message to opponents, that it is better to fight them [Bin Laden's followers] on their land than their fighting us [Americans] on our land.

I can reply to these errors by saying that war in Iraq is raging with no letup, and operations in Afghanistan are escalating in our favor, thank God, and Pentagon figures show the number of your dead and wounded is increasing, not to mention the massive material losses, the destruction of the soldiers' morale there and the rise in cases of suicide among them.

So you can imagine the state of psychological breakdown that afflicts a soldier as he gathers the remains of his colleagues after they stepped on land mines that tore them apart. After this situation, the soldier is caught between two hard options. He either refuses to leave his military camp on patrols and is therefore dogged by ruthless punishments enacted by the Vietnam butcher [U.S. Army] or he gets destroyed by the mines. This puts him under psychological pressure, fear and humiliation while his nation is ignorant of that [what is going on].

The soldier has no solution except to commit suicide. That is a strong message to you, written by his soul, blood and pain, to save what can be saved from this hell. The solution is in your hands if you care about them [the soldiers]. The news of our brother mujahedin is different from what the Pentagon publishes. They [the news of mujahedin] and what the media report is the truth of what is happening on the ground. And what deepens the doubt over the White House's information is the fact that it targets the media reporting the truth from the ground. And it has appeared lately, supported by documents, that the butcher of freedom in the world [Bush] had decided to bomb the headquarters of the Al Jazeera in Qatar after bombing its offices in Kabul and Baghdad.

On another issue, jihad [holy war] is ongoing, thank God, despite all the oppressive measures adopted by the U.S. Army and its agents, to a point where there is no difference between this criminality and Saddam's criminality, as it has reached the degree of raping women and taking them as hostages instead of their husbands.

As for torturing men, they have used burning chemical acids and drills on their joints. And when they give up on [interrogating] them, they sometimes use the drills on their heads until they die. Read, if you will, the reports of the horrors in Abu Ghraib and Guantanamo prisons.

And I say that, despite all the barbaric methods, they have not broken the fierceness of the resistance. The mujahedin, thank God, are increasing in number and strength — so much so that reports point to the ultimate failure and defeat of the unlucky quartet of Bush, Cheney, Rumsfeld and Wolfowitz. Declaring this defeat is just a matter of time, depending partly on how much the American people know of the size of this tragedy. The sensible people realize that Bush does not have a plan to make his alleged victory in Iraq come true.

And if you compare the small number of dead on the day that Bush announced the end of major operations in that fake, ridiculous show aboard the aircraft carrier with the tenfold number of dead and wounded who were killed in the smaller operations, you would know the truth of what I say. This is that Bush and his administration do not have the will or the ability to get out of Iraq for their own private, suspect reasons.

And so to return to the issue, I say that results of polls please those who are sensible, and Bush's opposition to them is a mistake. The reality shows that the war against America and its allies has not been limited to Iraq as he [Bush] claims. Iraq has become a point of attraction and restorer of [our] energies. At the same time, the mujahedin, with God's grace, have managed repeatedly to penetrate all security measures adopted by the unjust allied countries. The proof of that is the explosions you have seen in the capitals of the European nations that are in this aggressive coalition. The delay in similar operations happening in America has not been because of failure to break through your security measures. The operations are under preparation, and you will see them in your homes the minute they are through [with preparations], with God's permission.

Based on what has been said, this shows the errors of Bush's statement — the one that slipped from him — which is at the heart of polls calling for withdrawing the troops. It is better that we [Americans] don't fight Muslims on their lands and that they don't fight us on ours.

We don't mind offering you a long-term truce on fair conditions that we adhere to. We are a nation that God has forbidden to lie and cheat. So both sides can enjoy security and stability under this truce so we can build Iraq and Afghanistan, which have been destroyed in this war. There is no shame in this solution, which prevents the wasting of billions of dollars that have gone to those with influence and merchants of war in America who have supported Bush's election campaign with billions of dollars — which lets us understand the insistence by Bush and his gang to carry on with war.

If you are sincere in your desire for peace and security, we have answered you. And if Bush decides to carry on with his lies and oppression, then it would be useful for you to read the book "Rogue State," which states in its introduction: "If I were president, I would stop the attacks on the United States: First I would give an apology to all the widows and orphans and those who were tortured. Then I would announce that American interference in the nations of the world has ended once and for all."

Finally, I say that war will go either in our favor or yours. If it is the former, it means your loss and your shame forever, and it is headed in this course. If it is the latter, read history! We are people who do not stand for injustice, and we will seek revenge all our lives. The nights and days will not pass without us taking vengeance like on Sept. 11, God permitting. Your minds will be troubled and your lives embittered. As for us, we have nothing to lose. A swimmer in the ocean does not fear the rain. You have occupied our lands, offended our honor and dignity and let out our blood and stolen our money and destroyed our houses and played with our security, and we will give you the same treatment.

You have tried to prevent us from leading a dignified life, but you will not be able to prevent us from a dignified death. Failing to carry out jihad, which is called for in our religion, is a sin. The best death to us is under the shadows of swords. Don't let your strength and modern arms fool you. They win a few battles but lose the war. Patience and steadfastness are much better. We were patient in fighting the Soviet Union with simple weapons for 10 years, and we bled their economy, and now they are nothing.

In that there is a lesson for you.