The Effects of Weed Smoking on Smart People 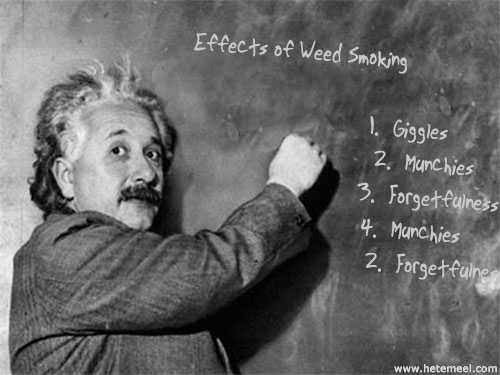 Yep, I think those are about the same findings the researchers arrived at in the 70s after the most extensive study undertaken by the federal govt. . Nixon was said to have been so outraged that he just trashed the findings and simply intensified the war on drugs. Knowledge and truth were concepts he seemed to have had a problem with, I guess.

bud ain't taxable, that is why it will never be legalised
Anonymous Report This Comment
Date: February 25, 2006 12:46AM

Marijuana is a WEED. If legalized, it could be grown EVERYWHERE. No way to tax or control it. Alcohol is the governments preferred drug for the masses. A control and distribution channel is already well established, as is the flow of money. Don't get me wrong, I don't like any drug, but it is hipocritical for the government to approve one harmful drug and persecute citizens for using a different one. Who owns your body again? Who is the victim again?
Anonymous Report This Comment
Date: February 25, 2006 11:23AM

kick their asses? a waste of time i say fuck it let the americans have their country (though i do love it myself) it's not for me even though i can't stand alot of the people living in my other option, i'll just have to learn to live with them i'm pretty sure i'll forget about the fact that i'm surrounded by pussies after about ten minutes(or 20 bong hits) anyway lol oh canada...blah blah blah
cesiuminjector Report This Comment
Date: February 27, 2006 06:38AM

If they legalized it there would be a whole new tax base for the governments ongoing "profit center" search. Sure it is a weed, but few people would bother to grow it if they could just buy some instead without fear of retribution.

And ... on the flip side, think of the $$ the govt. could save in the incarceration of sellers/users it spends currently ! "Windfall Profit" comes to my mind :>

The biggest reason the fed will never legalize it is that in doing so it would violate treaties already in place with other govts.

If pot was legalized, there would be =no= new tax base. Enough people would throw a few seeds in their garden that we'd have tons of dope being passed around for free to pretty much anyone who wanted it.

Saving $ on not incarcerating people for stupid "victimless crimes" like pot possession would do the gov't/taxpayers some good, though, you're right there.

The US won't legalize pot because it will "violate treaties"? Oh please. When has violating treaties stopped the US from doing anything it wants? Taking land, dropping cluster bombs and white phosphorous, torturing, building more nukes...


"Treaties only matter to those who cannot enforce them." - yank principle.

Yet there are still people who imagine yanks will respect a treaty or deal with them! I don't understand how thick people can be.