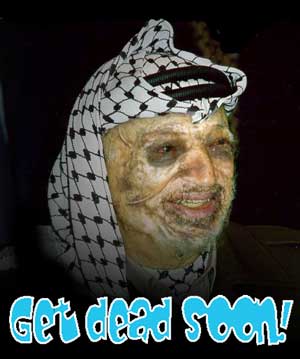 He could have stopped Palestinian terrorists from murdering innocent jews if he had wanted. He claimed he tried hard but I don't believe him. The terrorists he claimed to be trying to stop said they were his loyal followers and would do what he wanted, they were in his own criminal gang!
strife Report This Comment
Date: May 11, 2005 09:26AM

Thank Goed he's dead. Now peace between Israel and Palestine at least has a remote chance.