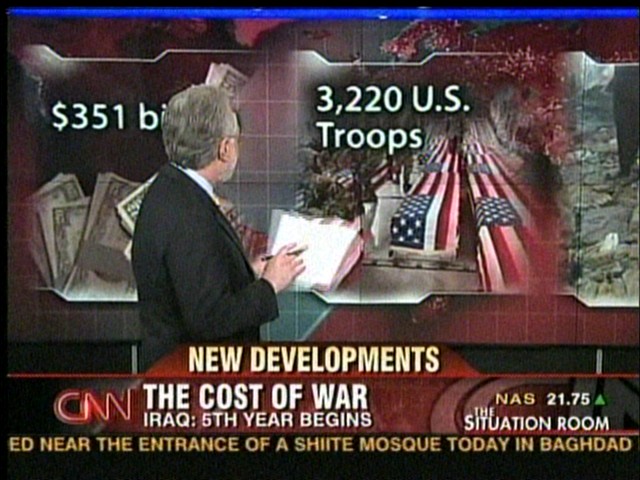 how many dead in vietnam? remember? kennedy,johnson,kerry? nasdaq up 22%
blame bush.
Anonymous Report This Comment
Date: March 20, 2007 05:16AM

Well, isn't that special a former AIPAC Lobbyist giving out the news.

in every pic you keep saying the stock market is up..as if thats a good thing. Interest rates are at 5 year highs and the rich keep getting richer. yes..i do blame bush thanks for pointing that out.
jgoins Report This Comment
Date: March 20, 2007 11:40AM

don't you people realize that interest rates and the stock market go up and down all the time? Nothing new here, no blame no credit. As for the amount of US dead in Iraq, that is just the nature of war. They knew what they were geting into when they joined the military. They knew there was a chance they could get killed.
madmex2000 Report This Comment
Date: March 20, 2007 12:31PM

There you go jgoin, they should take total responsability for they're own deaths even though they don't make any of the decisions that help them die even more.

So what you're saying is that we shouldn't listen to them cry about that war because they are the ones that made that stupid choice in the first place?

You need to get your own website and let everyone know that if we invade Iran there is a good chance that they will die, BUT, you strongly support that, then smile real big.

Not what I said. I joined the military during the Viet Nam war and knew there was a chance I could die but I did it anyway. People know what the military is and they choose to join, there is no draft unfortunately. The people in the military choose to be there for their own reasons and they know the risks. Yes I do want the US to invade Iran because allowing Iran to gain nuclear weapons will have far reaching consequences for the entire world not just Israel. The UN can do nothing to prevent Iran from doing as it chooses so the only thing which has a chance of stopping them is a military incurrsion.