bush is a asshole 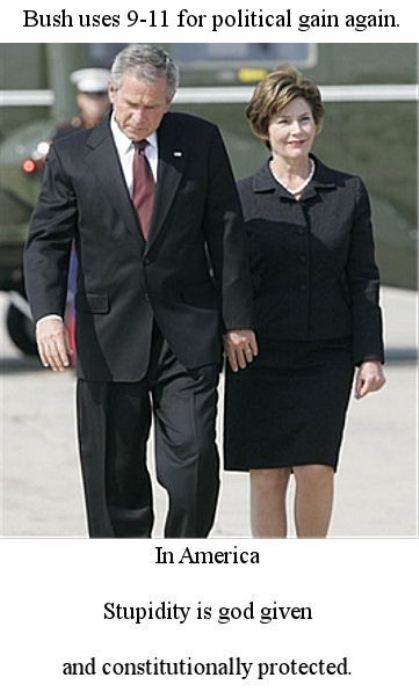 dude, all of the candidates and polliticians exploit the victims of 9-11 for pollitical gain
they are all in it to profit
the people need to get away from their telivised distractions, rise up and hang the entire ruling class

The problem with that shaDEz is that then the guys that lead us into that "new world" will be seen as heroes, rise up, become dicks and start fucking the people just like now and just like, yes, your favorite, communism did.... people are people, that's one of the main reasons I know that we are mammals, it's just survival of the fittest deep down in our bones, it will NEVER go away!
Anonymous Report This Comment
Date: September 23, 2007 11:20AM

NO! We will replace the scumbag rulers with the people! No more representative democracy! DIRECT DEMOCRACY! POWER TO THE PEOPLE!
ORLANDO399 Report This Comment
Date: September 23, 2007 11:31AM

well, then why don't you just kill yourself then... it is the losers like you that socialism never was fulfilled and went back to capitalism
"oh no, we're all fucked! we can never do anything because we are too weak, and this is dawinism" no my friend, according darwinism, you are not fit... so get the fuck out, and let the rest of us develop
hate to be so harsh with this, and really i'd rather you take these words and evolve instead of actually do what i am suggesting... but if you can't well then please quite kindly get the fuck out of this world! and all the rest that think like this
we have no use for you... with your " i can't, then therfore none of us can" attitude... kindly fuck off then and let the rest of us do this thing... but unfortunatley, and i are quite aware of this fact, this will require a bloody fight... but so be it
fuck the the rich! power to the people

No matter what form of government there will always be those who will be in power and as we know power corrupts. Even if we the people could find some method of governing ourselves there will always be some in control of others and there in lies the problem. When a few have control of many the human animal will always usurp that power. It is money which mankes the world go and if a country has no money it can't function. If we have money then we will always have those who will have more of it than others and that gives them power. If we do away with money then how do we get people to work? Nobody works just for the pride of the job especially if it is a dirty rotten job. Who will work in the sewers if there is no method of compensating them? As much as I like the idea of taking away from the rich and giving to the poor, it will only make others rich and we will have the same problems with different rich people.
quasi Report This Comment
Date: September 23, 2007 05:10PM


Once upon a time, on a farm in Texas, there was a little red hen
who scratched about the barnyard until she uncovered quite a few grains of wheat.

She called all of her neighbors together and said, "If we plant this wheat, we shall have bread to eat. Who will help me plant it?"

"Then I will do it by myself," said the little red hen. And so she did;
The wheat grew very tall and ripened into golden grain.

"Who will help me reap my wheat?" asked the little red hen.

"Out of my classification," said the pig.

"I'd lose my seniority," said the cow.

"I'd lose my unemployment compensation," said the goose.

"Then I will do it by myself," said the little red hen, and so she did.
At last it came time to bake the bread.

"Who will help me bake the bread?" asked the little red hen.

"That would be overtime for me," said the cow.

"I'd lose my welfare benefits," said the duck.

"I'm a dropout and never learned how," said the pig.

"If I'm to be the only helper, that's discrimination," said the goose.

The pig just grunted in disdain.

And they all painted "Unfair!" picket signs and marched around and around the little red hen, shouting obscenities.

Then a government agent came, he said to the little red hen, "You must not be so greedy."

"But I earned the bread," said the little red hen.

"Exactly," said the agent. "That is what makes our free enterprise
system so wonderful. Anyone in the barnyard can earn as much as he wants. But under our modern government regulations, the
productive workers must divide the fruits of their labor with those who are lazy and idle,"

And they all lived happily ever after, including the little red hen, who smiled and clucked, "I am grateful, for now I truly understand,"

But her neighbors became quite disappointed in her. She never again baked bread because she joined the "party" and got her bread free.

And all the Democrats smiled. 'Fairness' had been established.
Individual initiative had died, but nobody noticed; perhaps no one cared......as long as there was free bread that "the rich" were
paying for.

And regarding the picture posting, hasn't anyone realized that the democrats are the ones benefiting most politically from this unpopular war? In public the democratic hopefuls say, "Look at these casualties, isn't it awful what Bush has done," while behind closed doors I think they jump for joy at the casualties because every death in Iraq gives them a better chance to get the Presidency. Every failure or supposed failure within an administration becomes a plus for the opposition, so who is really benefitting politically?
Anonymous Report This Comment
Date: September 24, 2007 12:07AM

!THANKS QUASI!, There is still hope for this country...

Damn it Laura, would you quit pinching my ass.
Anonymous Report This Comment
Date: September 24, 2007 07:08AM

shaDEz, hopefully you are not the leader of "The New Country" because you will kill anyone that voices THEIR, well, voices..... shaDEz says... "well, then why don't you just kill yourself then", just imagine him as a leader of a movement that had the power to have you killed, I would be on the top of the list now, and shaDEz one of the first "Success" books I ever read was, "The Power of Positive Thinking" (about 15 years ago), that shit you just spit out wasn't very positive, you are so sure of Communism that you will not open your eyes to anything else, you are a "prisoner".

"The Communists are against religion (Christianity), and they seek to destroy religion; yet, when we look deeper into the nature of Communism, we see that it is essential nothing else than a religion (Judaism)." (A Program for the Jews and Humanity, Rabbi Harry Waton, p. 138).

Well, Communism failed but if you look around Socialism is still pushing forward, not always right out in the open, but, it never stops, all I can say is helping people just gives you the power to demand thanks!

You should create a Blog and keep it for 20 years, I'll follow just to research where you started, Brainwashed by Professors into Communism to (Dictator?).......?

Oh yeah... I can't believe I agreed more with jgoins of all people (although he just rattled off what I already went over, and a little to well, did the other jgoin get fired?) and quasi (that was some good farm shit), you are both still sheep in my eyes.

Just perfect, quasi. I'm copying that one and sending it.

No anonymous, I am the same jgoins I have been for over 56 years and I ma not being paid for anything I do on the internet by anyone. I only wish I was, where can I go to apply?
Anonymous Report This Comment
Date: September 24, 2007 07:55PM

Yeah, and if you go to certain offices with men in uniform they'll give you a free ride to Iraq....

It is absolutely impossible to change the world from within this site.