Gestapo Tactics..... Letting him go potty before taking him away.... Gestapo 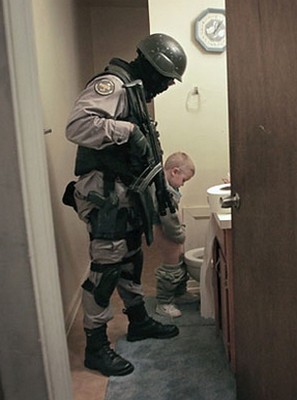 Comments for: Gestapo Tactics..... Letting him go potty before taking him away.... Gestapo
Anonymous Report This Comment
Date: November 16, 2007 06:54AM

NWO is already in effect. You didn't worry about it when it could of mattered. We all render under Ceasar now. The president of pakistan said that his country was under terrorist attack and therefore would not step down and declared marshal law against a democratic society. Sounds like he followed an American example.

Jgoins when it happens to you or some one in your family ,maybe it will knock your blinders off. Can only hope.....

You have no rights.....Habious Corpes has been suspended and now your ruled under Homeland security. Where is that in the constitution.

But, when it comes to Islamic crap he worries about that continuously (sells fear

Well madmex if it has happend then maybe you should gather an army and do something about it.
ToucanSam Report This Comment
Date: November 17, 2007 04:27PM

Ya jgoins. I think that's exactly what I'll do. But I believe "the government" frowns upon that sort of thing, and for good reason. It would be IMPOSSIBLE for them to funnel the sheep down the line to slaughter.

While you where in you where not killed (good) or maimed (not so good). But if you where YOU would probably have some different opinions about things like this you prick.

Hey, didn't you win the vote for least liked personality on plus613???


More Orwellian rule of law existed under the Clinton regime.

I can list many examples, first of which was the assault on the second amendment.