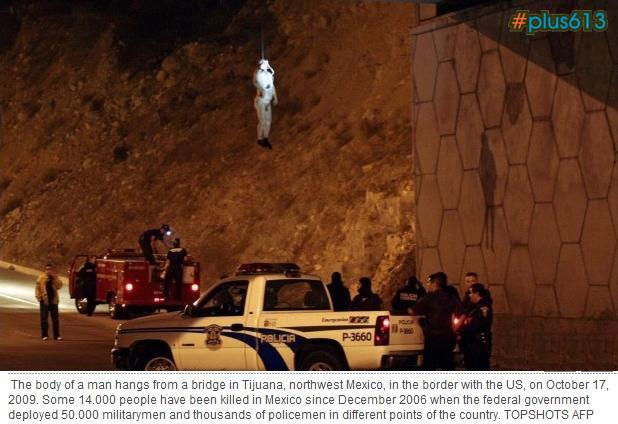 Just more proof that the war on drugs doesn't work. If the US and Mexico simply agreed to legalize the controlled sale of weed, coke and heroin and took the windfall profits that could be made from taxing these "products" (not even mentioning being able to cut billions of dollars from their budgets that they currently spend on trying to stop the inevitable flow of illegal drugs) instead of continually bangin their collective heads against the wall of drug enforcement (like the pissed off retards these actions instead resembles) this "problem" would largely just go away quietly in a matter of 2yrs or less

Should have been figured out after the failed experiment with prohibition that ended 76 years ago, and alcohol is one of the most dangerous and destructive drugs out there.
90130_ Report This Comment
Date: October 19, 2009 02:20AM

With the blurry details in this pic, it almost looks like they hung a Storm trooper.

so mr kim why do u think it doesnt happen ?
imho these big profits u are talking about would not happen. Just think about it. Weed would become surely number 1 or 2 drug within the next generation. and weed is not that profitable as selling alcohol. i mean u can even grow it in ur own garden without putting much work in it. also the tolerance developing and addictive potential of cannabis is very low compared to alcohol. a normal and healthy guy can end up drinking 100$ a night, but u will never be able to smoke away 100$ of weed.
and the consume of alcohol and tabaque goes hand in hand.
alcohol cunsumer just spend way more money to get their kicks. just think about a regular friday evening when u go out to party. nice clothes $ , night club $ , music $ , taxi $ car crash $, mc donalds$, cigarettes $ etc..

not to speak of the changes in society that a legalization of all drugs would mean. the number of drug addicts would drop and there would be more people with a wider horizont putting the actual rulers in question. A better world imho !

they rather keep it the negative way for the sake of profit. thats it !

There's a cuppla reasons these policies are in place and will problee remain so.

With government always standing at the ready to control their citizenry the vilification of drug users makes for an easy target and allows the govt. to keep a thumb firmly placed over society as the drug enforcement operations themselves allow for societal infiltration and surveillance on a broad scale, which I think govt. likes too much to willingly give up.

Sadly our justice system is bogged down by a huge backlog of drug related cases, our prison system is overburdened with drug related convicted criminals and the state and federal governments spend untold billions annually collectively in attempting to "win" this obviously unwinnable war

Someone in a powerful place is making big money off the drug war and drug sales. Only drug bosses you ever hear of are Mexican or Colombian. So there are only dime-bag dealers in the USA? Don't think so. Justme, that is a persuasive argument; the tobacco and alcohol industries have powerful voices.

Several European countries have relaxed laws especially on cannabis with little if any increase in users. In America, 37 percent of adults have tried marijuana; in the Netherlands the figure is 17 percent, although use among 18–20-year-olds did increase threefold after legalization. Heroin usage rates are three times higher in the United States than in the Netherlands. Their youth may be less disaffected mind you.