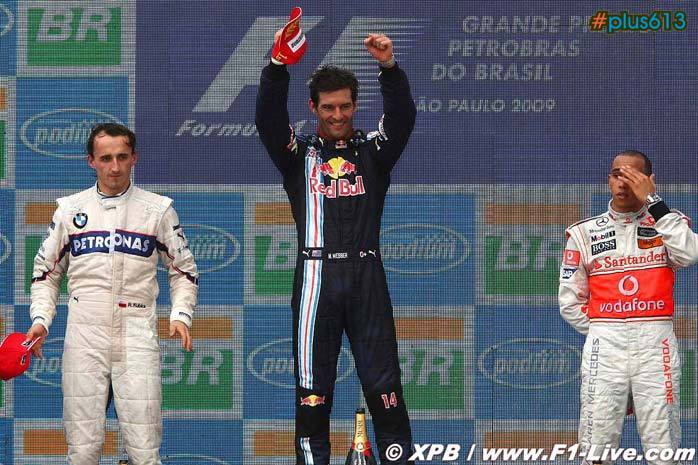 Yeah it was a great drive by Webber. It's a bit late in the season for him now though.

Button is a deserving winner of the WDC - him and Lewis Hamilton are about the only ones who have been consistently overtaking on the track.

For two years in a row a Brit, driving car number 22, and powered by Mercedes, has finished 5th at Interlagos to win the WDC.

Yeah.. though last year was entirely Trulli's fault that Hamilton won it, really he shouldn't have, it came to the second last corner.. I felt bad watching Massa's family celebrate only for the penny to drop that it was all over by a point.

Still, it's been an interesting season, a lot has gone on. I hope Webber will be even more competitive next season and build on his 2 wins this year.

" - quite possibly. We'll have to wait until testing of the 2010 cars but I can see the Brawn's not as competitive next year without the Honda money behind them. I also think Ferrari have fallen behind in the development stakes. Alonso will help in the future, but it will take a year or two. My prediction is that the race next year will be between McLaren and Red Bull, and depending on who McLaren have to partner Hamilton, Red Bull may have the more consistent drivers so may take out the constructors championship. Toyota, if they stay in, may be up there too. Let's just hope it's an enjoyable next season.

As an aside, of sorts, has anyone heard if Loeb has been confirmed as a Toro Rosso driver for Abu Dhabi?

Last I saw about Loeb was him saying he wasn't sure he's ready for F1. Would be interesting to see if he could cut it though.

Regarding teams etc, I actually expect Ferrari to be right up there next season. They've been testing 2010 parts in Friday practise for the past few rounds already, and had given up development of the 2009 car quite a while ago.

The main thing is the cars next season are practically identical to this season, so although Brawn don't have Honda's money behind them, they do have the car to do the business. At least they did, before Red Bull started spanking them in the second half of the season.

The only real difference is the Ferraris and McLarens have to take out their KERS units and have to redesign the weight distribution of the cars - which shouldn't be too hard. I think the racing at the top will be much tougher next year.

Renault won't be up there, but I think they'll improve if they can get the driving talent. Same with Toyota. Ferrari, McLaren and Red Bull all at the top with Brawn bringing up 4th. Alonso and Massa will both have something to prove in Ferrari.

If Kimi goes to McLaren I think it'll also be very interesting racing between him and Hamilton. Neither will tolerate being beaten by the other.

I also think Force India is the black sheep which may actually get somewhere next season. They've been building the team up since Spyker bought Midland and have started to get some pace in.