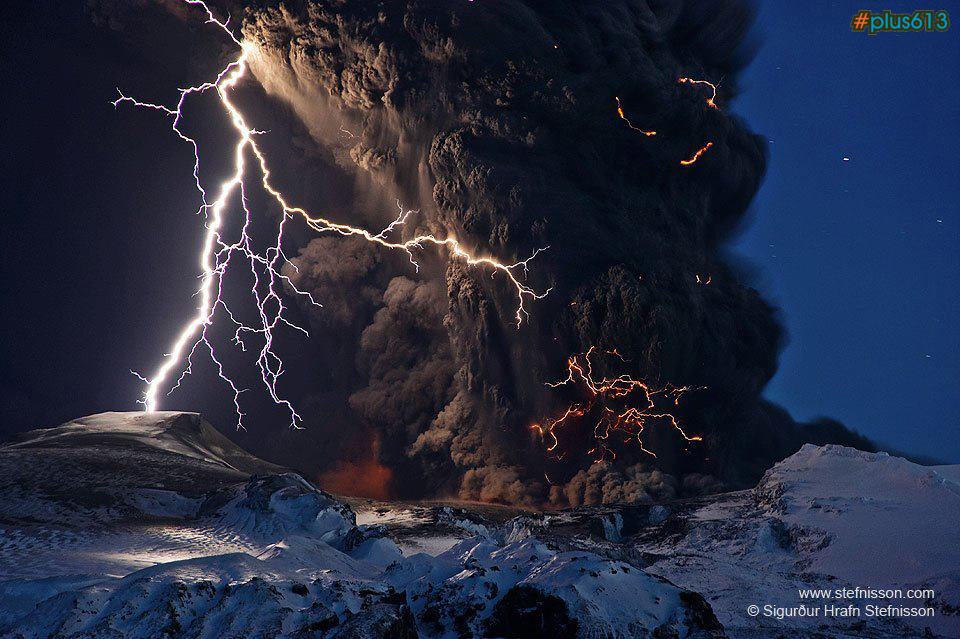 The Eyjafjallajökull volcano in southern Iceland began erupting on 2010 March 20, with a second eruption starting under the center of a small glacier on 2010 April 14. Neither eruption was unusually powerful. The second eruption, however, melted a large amount of glacial ice which then cooled and fragmented lava into gritty glass particles that were carried up with the rising volcanic plume. Pictured above during the second eruption, lightning bolts illuminate ash pouring out of the Eyjafjallajökull volcano.
anonymonkey Report This Comment
Date: August 26, 2012 03:43AM

This image is clearly copyrighted and should be removed in accordance with #plus613 rules. ®
fossil_digger Report This Comment
Date: August 26, 2012 02:14PM

i got all these from a facebook page, i didn't remove the credits giving them full credit, so.....blow me.

Nobody follows those stupid rules here. They only exist for appearances and to satisfy potential advertisers and shit like that which doesn't matter right now, since there aren't any advertisers helping out. There is discussion about them being rewritten if you bother to read the site forums. I used to bitch about them too but I have realized that it doesn't matter so why bother. If something is really bugging you then report the image or comment and if they are sober enough and care enough about it they might do something. It has been known to happen but you've got to have a pretty good reason. I don't think copyright qualifies and I doubt that anyone is gonna bug these guys about that shit cuz no one is making any money from it, which is of course the bottom line for copyright infringement cases. The copyright holders are being credited so that part of the legality issue is satisfied.