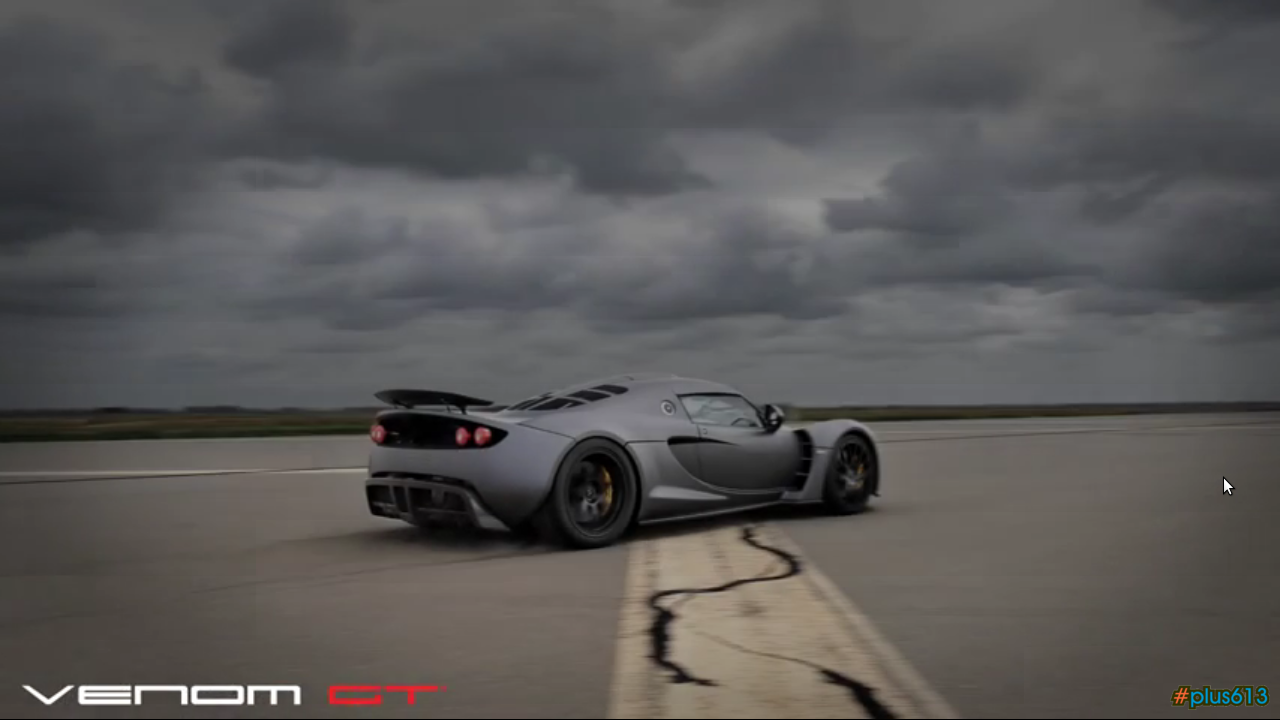 A new production vehicle top end record that beats the the competition cold, and ... for less than 1/2 the cost of a Veyron. Oh yeah, and it's built right here in the Lone Star State

Here's a link to the video: [campaign.r20.constantcontact.com]

SEALY, Texas - Hennessey Performance today announced that on February 9, 2013 its street-legal Venom GT accelerated to 265.7 mph (427.6 km/h) during testing, establishing the exotic hypercar as the world's fastest production vehicle available for public purchase. The top speed run was accomplished over a distance of two miles using a full-production Venom GT. All testing was validated by (2) VBOX 3i GPS-based data logging systems and VBOX officials were on hand to certify the numbers.

"While a Veyron Super Sport did run 267.8 mph, Bugatti speed-limits its production vehicles to 258 mph," said company founder and president, John Hennessey. "Thus, at 265.7 mph the Venom GT is the fastest production car available to the public."

On hand during testing was Captain Eric "Snake" Venoma, Commanding Officer at NAS Lemoore, who was watching over the nearly 200 battle-ready fighter jets (including the largest concentration F/A-18 jets in the world) that were located nearby during the Venom GT top speed runs. In addition, TopGear US Editor, Pat Devereaux was present to witness the top speed testing as part of a story produced for the May 2013 issue of TopGear magazine.

"While the 2.9 mile long runway is more than enough acceleration distance for a F/A-18 fighter jet, it was far too short for the Venom GT to reach it's true top speed," said Hennessey Performance CEO, Don Goldman.

Designed to operate on premium unleaded pump fuel, the Venom GT is powered by a 7.0-liter (427 cubic inch) V-8 engine fed by twin Precision turbochargers that team to produce 1,244 horsepower and 1,155 lb-ft of torque at 19 psi (1.3 bar) of boost pressure. Weighing just 1,244 kg (2,743 lbs), the rear-wheel-drive Venom GT delivers a power-to-weight ratio of 1 horsepower per kilogram of vehicle weight.

In July 2010, a Bugatti Veyron Super Sport (propelled by a 1,200 horsepower quad-turbo 16-cylinder engine) attained a speed of 267.8 mph- 2.1 mph faster than the Venom GT. However, the top speed was achieved using a state of tune that is not available to customers paying the $2.5 million dollar purchase price as a production Veyron SS is speed limited to 257.8 mph. Furthermore, the Veyron SS top speed testing was conducted over the 5.6 mile long straightaway that is part of Volkswagen Group AG's private test track located near Ehra-Lessien, Germany. "Afforded the same distance to accelerate, the Venom GT would exceed 275 mph," said John Hennessey.

In February of 2013, the Venom GT officially became the quickest accelerating production vehicle in the world as it ran 0-300 km/h in 13.63 seconds, thus establishing a new Guinness® WORLD RECORD- a record that was previously held by the Koenigsegg Agera R. While conducting the Guinness® World Record runs, despite marginal traction (due to three days of previous rainfall), the Venom GT accelerated from 0-60 mph in 3.05 seconds, 0-100 mph in 5.88 seconds, ran the standing quarter-mile in 10.29 seconds at 158.83 mph, and ran the standing half-mile in 15.22 seconds at 204.65 mph.

Although Guinness® only recognizes runs made in kilometers per hour (km/h), the Venom GT also set a new unofficial acceleration record of 0-200 miles per hour (mph) in 14.51 seconds as verified by VBOX data. The 0-200 mph record was previous held by the Koenigsegg Agera R that required 17.68 seconds time- 3.027 seconds slower than the Venom GT. By comparison, the Bugatti Veyron Super Sport (powered by a 1200 horsepower, quad-turbocharged, 8.0-liter, 16-cylinder engine channeling power through an all-wheel-drive system) ran 0-200 mph in 22.20 seconds during an AUTOCAR test- 7.69 seconds slower than the Venom GT.

Hennessey plans to only build a total of 29 Venom GTs, with one-third of the production run already being sold. Thus, the Venom GT is not only the quickest and fastest production car in the world, but it is also one of the most exclusive. The heavily carbon-fiber Venom GT costs $1.2 million (USD) plus shipping, not including options. Each vehicle is custom built to order and requires six months for completion.

i think i'm in love!

Oh yeah. that puppy looks like a ton of fun!

I saw a vid about a year ago where they were on a track where they were lettin cars leave like every minute and they hunted down a Veyron that had left ahead of 'em and even had to dog it along behind the Veyron the last minute or so of the run.

If you look at the engine bay shots you can find of the Viper GT you can see they've done everything professionally, as technically right and perfect as possible and then astoundingly beautifully as well. When I saw those shots I KNEW they had not only created a dragon slayer, but done so with style and grace at the same time, which is genuinely gratifying every bit as much as it is thrilling to see

Absolutely beautiful car. To be fair though it's beating a Veyron that's been limited on top end, not it's full capability. That said though the performance, price, styling, etc. combination... that's one amazing machine. Sign me up!

Edit: just noted that it was really still climbing as well at the top... they need to take it to VW's test track in Germany to see what it'll do on 15 miles (??) of straight road. Amazing.

this is a friend's Gonzo twin turbo Hennessey Viper posted a while back: Hey O man, don't forget the GT is also set to attain its 1200hp on pump gas and only 19psi of boost. I'd say that leaves a tremendous amount of "upward mobility" on what could be done from this same base package in terms of both all around performance and top end speed. Just a guess but I'd think its easily capable of takin on at least 25psi (if not 30psi) and that, coupled with race gas and a suitable tune could easily add between 60hp (very low ball figure) to 200hp (probably a bit high), which would make it even MORE of a monster

It's hard to tell from these vids for sure but it looks as if it's already beginning to break the tires loose on the top end of the rev range in each gear, which really isn't all that hard to imagine. Hell, the last 2.4 I built would do that in every gear with only 850hp

What is easy to see is that it seems to be quite capable of more top end speed given the same 7 mile straight the Bugatti was run at at VWs track. And ... it took the Bugatti longer in both time and miles to hit just 2mph more than the GT did, while yeah, the GT obviously had room to go, just not enough runway to get there with.

I like the Veyron, but for me, the styling, performance and better handling of the GT would make it an easy choice between the 2 cars, not even mentioning you could get a pair of GTs for the goin rate of the Veyron and have twice the fun

One of these days when my ship comes in, MrKim, I'm gonna have to let you see what you can do with my old Prelude which is showing it's age but still has some life left in it's stock incarnation.
Mrkim Report This Comment
Date: April 05, 2013 10:28PM

Everything from mild to wild is achievable Q man and I'd love to get the chance to tweak your Prelude for ya. Whether a simple reworking of the existing engine package or a nice turbo build with sweet street manners that will still pin ya to the seat when you nail it, playin with hot rods is always fun.

A cuppla years ago a cat I met up in Ohio wanted to take an old AMX and twin turbo it and man was I pumped about doin that. Unfortunately his crafty Ex managed to wipe out his war chest of funds (took him for close to $200k!) or we might well have built something truly wicked together