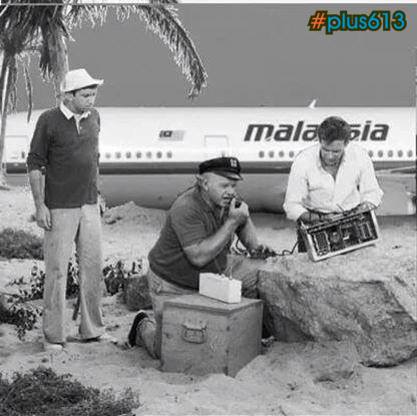 239 missing people and the very real possibility that the missing jet is not at the bottom of the ocean and instead is in the hands of a terrorist group that is converting it into a giant bomb that may be used to kill more innocent people...I fail to see any humor in that

and before anybody calls me a conspiracy nut; I'm not saying I think that's what happening, just that it's possible.
heck for all I know it was sucked up by a ufo

You're not a conspiracy nut if it turns out to be true. As of right now anything is possible.
quasi Report This Comment
Date: March 20, 2014 01:28PM

Laughter was my initial reaction. I apologize for my twisted sense of humor.
jgoins Report This Comment
Date: March 21, 2014 11:54AM

For all we know it was teleported to Alpha Centauri.
Bob Denver's brother Report This Comment
Date: March 27, 2014 02:57AM

You guy's should be ashamed of yourselves! Leave my bro out of this.
All you're doing is giving Hollywood more royalties from a GI revival.
Give your money to me instead, you pricks.

Well I don't recall seeing you out there trying to find the Minnow, so who's the real prick? Some fucking brother you are.
jgoins Report This Comment
Date: March 27, 2014 11:42AM

Seems more like the series Lost than Gilligan's Island.