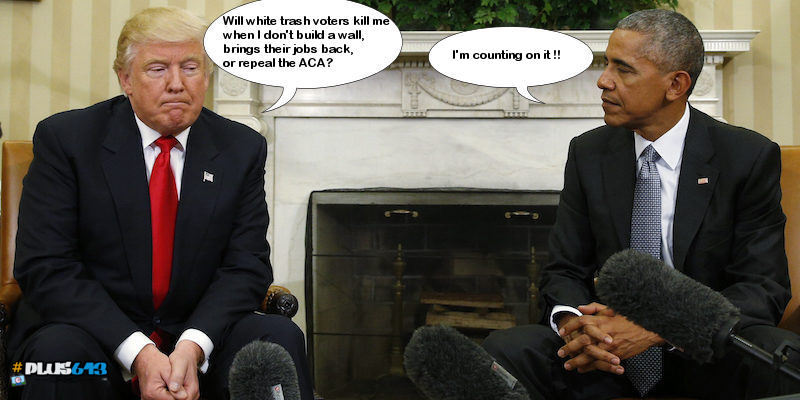 Say goodbye to Obama, the most pompous, stupidest President ever.
Roberto Report This Comment
Date: November 11, 2016 07:20AM

Say goodbye to Obama, the most intelligent, respectful, caring President the USA has ever had
and say hello to the biggest BUFFOON to ever enter American politics and
say hello to another war. Why? Because whenever the Republican party win office,
within two years, they always take the USA into war with another country.

Obama couldn't do shit because the republicans blocked nearly every bill he put to the senate.
Yeah, that's America moving forward ain't it?

You voted this Trump cunt in, now you're REALLY going to pay.

They are no different in my opinion.
Barry is an excellent orator but they are both from the same part of town. An attorney and a state senator is as far from the common man as you can get, even if he does put "civil rights attorney" on his resume.
You swapped politicians, that's all. Same shit different day.

Yup. That's why I don't get all the hoopla about the election and the results.

They're all the same. Not one of them gives a shit about the voter, unless you're their mates. It's nothing more than a circus.

People that worked at the College had an opinion of Obama"The other professors hated him because he was lazy, unqualified,
he had the lowest intellectual capacity in the building."
Bath house Barry has quite a resume.

Ever notice a big difference in political parties? In some places if you are republican and voted Trump you can get a beating and have your car stolen by democrats who supported Hillary. Notice all the protests and riots over the election, when Odamna won the first time republicans didn't riot or protest and were accepting the results. I am glad I changed my party affiliation from democrat to republican, democrats are not the same as they used to be.
aDCBeast Report This Comment
Date: December 02, 2016 06:47AM

Robert = TrumpTard that lives in a bibble where facts don't exist ..

We all know you are white trash ..

Look it up retard, none of what is happening now happened when Odamna won either election. I have no need for lies and never use them.
fossil_digger Report This Comment
Date: December 02, 2016 07:47PM

i've always loved the "tard-gument".
maybe some specifics would help the comprehension process? nah, you have to be a tard to be a wall street / hedge fund / bankster / N.W.O puppet.

i was gone for how long, and you guys haven't learned a damn thing. i hope i don't need to re-educate th masses again. i got a whopper of an ulcer from the last sessions.

oops. forgot to mention: how many campaign promises did Barry renig (sp.) on?
i bet jgroin can list 'em, it's prilosec time for me.

No I can't list any of Odamna's promises, I never listened to any of his campaign speeches. I didn't vote for him simply because of his skin color unlike so many others who voted for him for the same reason.