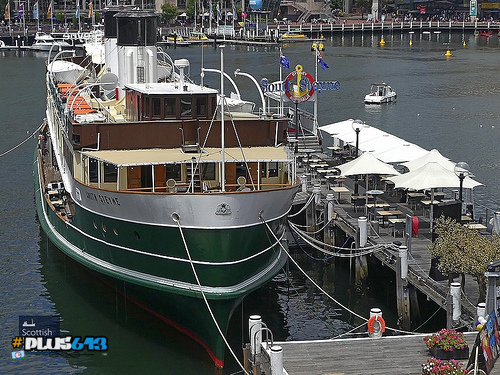 The South Steyne today, as a floating restaurant in Darling Harbour, Sydney.

She was the last of three ferries that were built in Scotland and sailed to Australia
under their own steam. (The other two were the Dee Why and the Curl Curl)
The ferries were named after suburbs on Sydney's northern beaches
and were in service before, during and after WWII.

The South Steyne was the only passenger vessel allowed to sail outside Sydney Harbour
and used to take a "scenic cruise" from Sydney up to Palm Beach and inside the
Hawkesbury River on weekends. A great excuse for people to drink beer, get pissed and throw up over the side
as there were no liquor licencing laws once you sailed outside the harbour back then.

I was one of many who worked on restoring this vessel for several years after the company that owned her burnt it out
to try and receive the insurance money because she was running at a loss.
It also exchanged owners a number of times till one of them actually put some serious money
on the table to get her fully restored to her former glory.

She can sail again under her own steam but doesn't any more for some unknown reason.
Many happy memories aboard her.