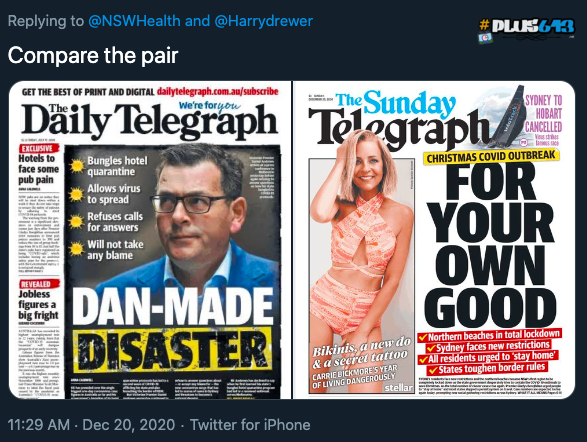 So this is interesting. For the US people, Victoria (my state, left) has a Labour government in power (kind of like your Democrats but maybe a bit more left leaning) and NSW (right) has a Liberal state government (our conservatives, similar but less right wing than your Republican party).

Rupert Murdoch (News Corp) owns probably half of the major newspapers in this country, including the Telegraph.

Both states have fucked up hotel quarantine and ended up with COVID outbreaks in their states.

Compare the front page of the next day's newspaper between the hated and liked leaders states... then for the Fox viewers amongst you, wonder if your media of choice isn't also biased. I know all media is, blah blah blah; but it's plain to see.

No wonder there's been more than 500,000 signatures on a petition for a Royal Commission into the role the media and particularly Murdoch media has in influencing elections and opinions here.

Pulse is right. It's worse than that. For a long time people who didn't support banning guns were called 'mentally ill'. Then this was published:

Note what's not mental illness in the legislation:

One week later the slander of 'mental illness' was replaced with 'right wing extremist'. The political control is that total. It took one week for the slander to change.